In February my husband’s sweet gelding succumbed to cancer and had to be put down.

We cried for hours: Callow Double Clover aka CD had been with us for 21 years. We’d bought him from a farmer in Ireland when he was 5 years old.

Many people in both the Richmond area and here in Southern Maryland where we currently live remember the gentle soul who helped so many riders gain back their confidence in the saddle.

Not only did we miss our beloved Irish horse, but we were now down to two horses at the farm. If I took mine off the property my friend’s huge Clydesdale would go berserk and jump the gate to follow him – he’d done it once before.

If the Clydesdale were to leave, my gelding Cruz Bay would gallop around and break a leg.

We needed a companion horse.

Lori Harrington, director of Freedom Hill Horse Rescue, had recently taken in four horses from a starvation situation. Their owner had abandoned them in a tiny paddock where there were originally five horses, but one had died the morning the rescue came to take them away.

With not enough to eat, competition for food had been fierce. Gentle Noah was a big loser in this fight: he was picked on by the other horses, kicked and bitten and prevented from eating anything at all.

The Thoroughbred was skin and bone and missing hair everywhere. 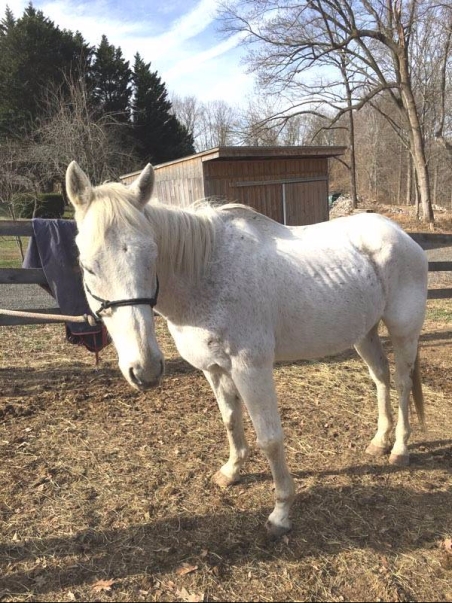 This is Noah in his tiny paddock with no grass. His expression tells you that he wasn’t interested in life anymore.

With the great care of the Freedom Hill staff he was already starting to fill out, and within a month of being fostered at my place I was able to take this photo of him: 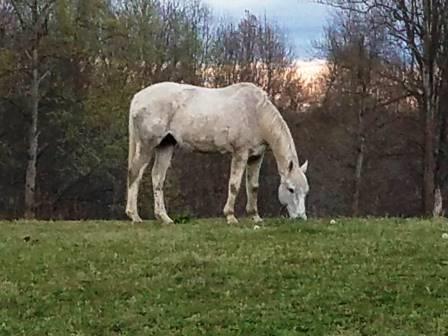 He was a perfect gentleman, and great company for the massive Clydesdale whenever I needed to take Cruz anywhere. Thanks to him, I was once again free to go on trail rides, lessons and shows.

Not only that, but I loved stroking his head and losing myself in his dark brown eyes. Even after his bad experiences, he was still trusting and forgiving.

He has an enlarged left knee from an old racing injury that was never properly tended to, and although not lame, will probably not be a good candidate for riding.

I contacted a veteran in Special Forces, whose name had been given to me by Lyndi Caruso, a whiz in essential oil therapy. Kevin was immediately interested in coming to see Noah. A former PTSD sufferer himself, he wanted to start an equine therapy program for other veterans with the disorder.

After meeting with the Freedom Hill board to discuss his program, he arrived with his psychologist wife to see Noah at my barn.

It didn’t matter to him that the horse may be unrideable. He needed a horse that veterans could bond with on the ground. That was the most important function Noah would have if he went into Kevin’s program.

Look Into My Eyes… 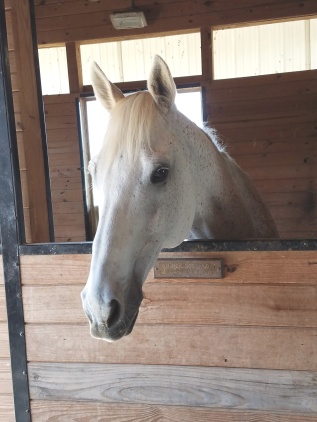 Kevin gave me some great insights into what it’s like to have PTSD and how horses help veterans heal from it – horses helped him get over it.

Jokingly I asked him to explain to me how these animals have such amazing healing powers ‘in three words or less.’

He said: “I can tell you in one word: connection.”

It’s hard to understand how that works unless you’ve looked into the luminous eyes of a loving soul like Noah and felt his soft acceptance of who you are.

Fueled by Noah’s gentleness and with Kevin’s assistance, I’ve attempted to convey the seemingly magical power of a horse to heal PTSD in Riding Out the Wager.

I’ll be sharing more about the book closer to its release date in August 2017.

Meanwhile, if you’re interested in finding out more about equine therapy for veterans, here’s an excellent article: Reining In PTSD with Equestrian Therapy

P.S.  Kevin did adopt Noah. Here he is enjoying the company of his new BFF Bijoux.

The story doesn’t end there, but that’s for another day! 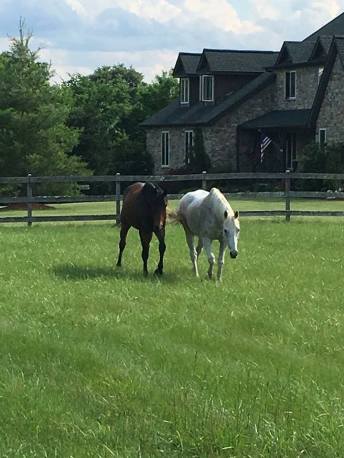