Twelve years ago, when the horse barn on our Maryland property was ready and our three horses had moved in, a grey tabby and white cat showed up.

He was friendly and vocal and visited frequently. I began feeding him and that was that. My barn = his barn.

At the time I was reading a book series by Alexander McCall Smith whose heroine’s name is Precious, so that’s what I called him because he was so pretty and I thought he was a girl.

Until I discovered his previous owner. The local cattle farmer, she told me his name was Junior and he was one of a litter of five, but was now fighting with his siblings. He had wandered off to get away from them.

I told her she was welcome to check if I really did have her cat and she agreed to come over.

Praying she wouldn’t want him back, I brought her into the barn. Junior took one look at her and ran off. “Yeah, that’s him. You can keep him.” 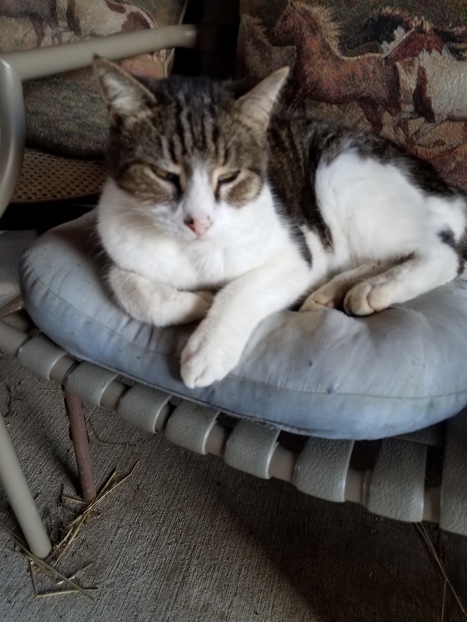 I didn’t like the name Junior, and never did improve on Precious, which in all fairness I couldn’t still call him. So he became ‘Barn Cat.’

He was extremely affectionate and extremely feisty. He’d come up to the house every morning and accompany me back to the barn to give him his breakfast, but I never moved fast enough in his opinion. He was always striking out at my legs and catching his claws in my pants.

As soon as he’d eaten, if I made the mistake of sitting down anywhere, he was in my lap like a shot, purring and kneading holes in whatever I was wearing. Many of my riding breeches suffered this treatment.

He trotted behind my horse down to the arena every time I rode, so he could watch us, or run across the sand chasing leaves, or dig a hole in front of me to do his business in. That cat was determined to be a part of everything! My instructor called him her assistant, because he’d curl around her legs while she gave lessons. He also leaped onto the laps of anyone who sat down to observe her teach.

In the winter he slept in our basement, which he could access via a dog flap. I’d feed him at the top of the stairs, then he’d rush to the front door to escort me down to the barn, where he’d demand a second breakfast.

He made me laugh whenever it snowed: I’d watch him hop out of one of my deep boot prints into the other on his way down to the horses.

Barn Cat was a brilliant mouser and many a morning I was greeted by the sight of rodents’ entrails in the aisle. Our dogs knew to keep away from him, for he had no fear and let them know it, and our house cat soon learned to give the semi-feral feline a wide berth if he was in the back yard.

He was about a year old when we first met, and quickly became an integral part of life at the barn. So he was thirteen when we found a buyer for our farm, who agreed to take care of him.

But I noticed he was slowing down and his belly had suddenly grown larger. The vet said he had a tumor.

Had Barn Cat decided he didn’t want new owners? I don’t know. But it was with a heavy heart that I took him back to the vet two days later.

That tumor was growing fast and it was time to do the decent thing. It was hard, for this truly remarkable cat had weaseled his way deep into my heart!

I said my goodbyes while he slowly fell asleep on my lap and have brought his ashes with me to South Carolina, to be with the family he chose.